The College of Central Florida is taking measures to ensure your safety. See COVID Updates
Home > About CF > CF at a Glance > Awards & Recognition

The College of Central Florida is consistently recognized nationally for its high-quality programs, affordability and accessibility. 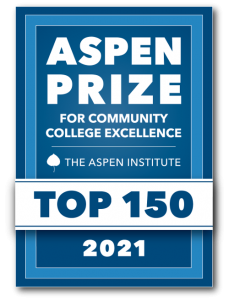 CF is ranked among the top 150 colleges in the nation for quality by the Aspen Institute College Excellence program. Rankings are based on performance in student outcomes, including graduation rates, improvement in student success and equitable student success.

For the Aspen Prize, in each two-year cycle, a jury of national experts selects 10 finalist institutions, and, ultimately, one winner of the prestigious award. CF was also recognized and deemed eligible for the $1 million prize in 2011, 2013, 2017 and 2021.

CF is accredited by the Southern Association of Colleges and Schools Commission on Colleges.

CF has consistently high pass rates on certification exams, including 100% for Physical Therapist Assistant, Radiography and Surgical Technology graduates and 90% for Nursing graduates in 2019.

CF ranks No. 7 in the U.S. for Best Online Business Certificate Programs by TheBestSchools.org for 2019.

CF ranks in the top 25 Best Online Colleges in Florida by SR Education Group. The ranking is based on alumni salaries and tuition rates.

CF ranks among the top 10 nursing programs in Florida by RNCareers.org for 2019.

CF ranks No. 30 in the nation for Best Colleges for Adult Education, according to GreatValueColleges.net. The ranking was developed from the 50 most affordable colleges on the U.S. News and World Report’s list of 100 colleges and universities with the highest percentage of students over the age of 25. (2017-2018)

CF ranks 27th in the nation for safest small colleges and universities by collegechoice.net. (2018)

More than $2 million in scholarships is available each year.

CF ranks No. 20 in affordability in the United States, according to the U.S. Department of Education. (2019 report)

76% of CF graduates leave the college with no debt.

At $112.92 per credit hour, CF is less than half the cost of a four-year degree at a state university.

CF has the third most affordable nursing degree in Florida, according to Collegechoice.net. (2018)

Students can choose from a variety of class options: day, evening, online and hybrid classes.

CF has six locations throughout Marion, Citrus and Levy counties.

Students can choose from 150+ academic pathways that lead to high-skill, high-wage careers.

95% of CF graduates are found working in their field or continuing their education within one year of graduation.

The average wage of CF Associate in Science graduates is $51,780.