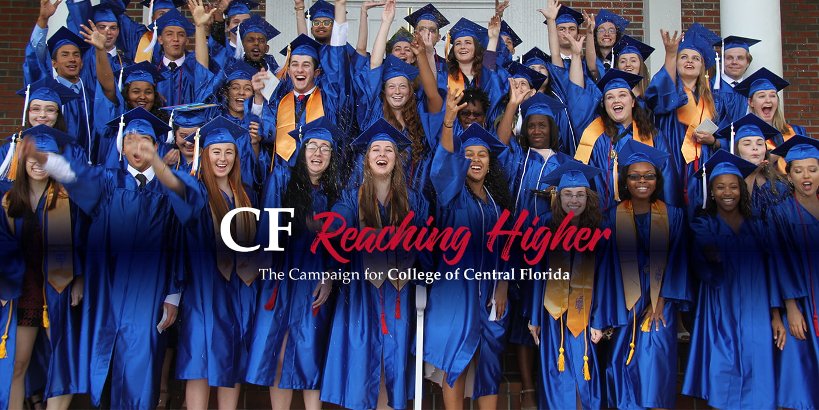 The College of Central Florida Foundation has exceeded its goal of $20 million by 27% for CF Reaching Higher: The Campaign for the College of Central Florida. The comprehensive fundraising campaign was publicly launched at Taste of Ocala in 2018, and more than $25 million has been raised. The CF Reaching Higher campaign surpasses the foundation’s previous Promise for the Future campaign total raised, completed in 2012, by more than 240%.

This is the largest fundraising campaign in the history of the College of Central Florida. Funds will accelerate CF’s efforts to provide innovative and experiential learning opportunities for students pursuing work force degrees in health care, agriculture and equine, and will expand opportunities to create programming and unique visitor experiences for guests of the Appleton Museum of Art, College of Central Florida.

When launched, the campaign was among the top 10 largest fundraising efforts in the country for a community college. Valencia College in Orlando recently announced the launch of a $30 million campaign.

Over the last five years, the CF Foundation has hit many milestones in its long and successful history. During that time, the foundation received two of its largest gifts from individuals: Vintage Farm, valued at over $2.9 million, in 2016, and the estate of Mary Brent Kraus, approximately $6 million, in 2020. In 2018, the foundation was recognized nationally by the Council for the Advancement and Support of Education for fundraising performance and by ImpactMatters.org as one of the most effective educational foundations for impact in 2019.

The campaign was quietly launched in 2015 with an initial goal of $10 million, and the target was increased to $20 million in 2017 when the goal was quickly surpassed.

“When we met to discuss the progress on the first goal, I remember then-Chair Fred Roberts Jr. saying ‘go big or go home,’ ” said Bill McCall, current chair of the CF Foundation Board. “And that’s exactly what the foundation and college staff did. They went big.”

Dr. James Henningsen, president of the College of Central Florida, said, “There was an audible gulp when the board said the goal should be higher. The foundation team, under the leadership of Chris Knife, has met an exceptional and historic goal. I am very proud of them, the Foundation Board of Directors for their vision, and our great college community. CF has an excellent story to tell, and we are transforming lives with the support of our many friends and partners.”

Knife has served as the executive director the CF Foundation since 2014.

“To paraphrase Sir Isaac Newton, if we have achieved more, it’s because we stand on the shoulders of giants, our predecessors,” said Knife. “That, and we live in a very generous and committed community which is eager to help students and the college prepare for the betterment of us all.”

Marc Westinberg, director of Foundations and Community Colleges for the Council for the Advancement and Support of Education, is quick to acknowledge the accomplishments of the CF Foundation. “The College of Central Florida has clearly proven its fundraising abilities over recent years. This new achievement of exceeding its $20 million campaign goal furthers that tradition of excellence and reconfirms the College of Central Florida Foundation as one of the top community college fundraising programs in the country. On behalf of CASE and the community college advancement community, congratulations to the College of Central Florida for your success and for reaching ever higher to support real and powerful change in the communities you serve.”

The CF Foundation, founded in 1959, is a not-for-profit, 501(c)(3) corporation that enhances the college’s programs and services through the development and management of private contributions and community partnerships. To learn more, visit CF.edu/foundation.